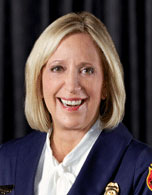 Rare is the glass ceiling Rhoda Mae Kerr can’t shatter — and next month, another one will go.

That’s when Kerr, Austin’s fire chief since 2009, is installed as the first woman to be president of the International Association of Fire Chiefs in the organization’s 142-year history.

She is also the first woman to serve on the group’s board of directors. Kerr is currently vice president of the group, which promotes professional development and tunes in to new products and service.

“It hasn’t taken a tremendous amount of time,” Kerr said. “It will take more time as president of the organization. The great thing is I get to brag on the city and bring things back.”

Kerr, who counts four generations of firefighters in her family — she remembers pictures of her great-grandfather next to a horse-drawn steam pumper — began her career in 1983 in Fort Lauderdale, Fla., going from driver to lieutenant to battalion chief to division chief and finally, in 2000, to deputy chief. She left Florida to lead the department in Little Rock, Ark., before coming to Austin to be the city’s first female fire chief.

“Each city has its own challenges, and I’m fond of turning challenges into opportunities,” she said. “Over 32 years, it’s been a journey. You kind of have to prove yourself all over again. It shouldn’t be that way, but it is.”

Change doesn’t come quickly to large institutions, and the Austin Fire Department has more than 1,000 sworn personnel and responds to about 84,000 calls each year. But, Kerr said, she’s promoted existing female firefighters and gotten female recruits in the academy.

One of the biggest challenges for the department came two years ago, when the U.S. Justice Department began investigating the Fire Department on allegations of discriminatory hiring practices.

When the Austin City Council last month unanimously approved the firefighters’ first collective bargaining agreement in the wake of the federal investigation, it was a sign the firefighters union and Fire Department leaders were closer to resolving the hiring issues.

“Our negotiations ended up successfully,” Kerr said. “It’s important to put that friction behind us.”

But Kerr was also targeted in a censure proclamation last summer by the International Association of Fire Fighters, a push that started locally, according to Bob Nicks, president of the Austin Firefighters Association.

“She’s not a very popular chief with the membership,” Nicks said. “I’d say 80 percent of our issues are resolved. We’re heading in the right way.”

The chief also came under criticism for staying in C0lorado for a golf trip during the Labor Day weekend fires of 2011, leaving subordinates in charge and keeping in touch digitally.

“I can’t change what happened,” Kerr said a few days after the fires, as her absence became a target for critics. “If I had it to do over again, I would have come back.”

Today, the challenges Kerr faces include looking to add new stations and two more battalions, or six people. The latter hasn’t happened since the late 1980s, she said.

“Our standard of coverage is the first unit is on the scene in eight minutes or less, 90 percent of the time,” she said. “We’re not meeting that goal.”

“If we’re given the direction to merge we can certainly do that. The people doing the job day to day all get along. There are some cultural differences,” she said.

Then there are the new duties as the incoming president of a longtime organization.

“I’m honored,” Kerr said. “I get to be the first woman in 142 years. I certainly hope I’m not the last or only, and I want other women to aspire to their dreams. And make sure you have working smoke detectors.”