The Austin Fire Department (AFD) announced on August 6, 2015 that it will be able to provide new pet oxygen mask kits for every unit in the city, thanks to a CrowdRise fundraising campaign started by the Auxiliary to the Austin Firefighters’ Association/Local 975, as well as donations from the community, People for the Ethical Treatment of Animals (PETA), and Invisible Fence. 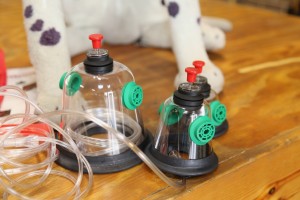 Last week, a story about the rescue and resuscitation of an 18-year-old cat at a house fire highlighted the masks that have been on every AFD unit since 2010. Originally donated by PetsAmerica, the masks have reached the end of their useful life and money was not available to replace them. Following a post about the issue on Facebook, the Auxiliary created a CrowdRise page to try and raise the $5,000 needed to replace the kits.

Although donations from the community started coming in almost immediately, the goal seemed pretty far off—that is, until PETA stepped in. They pledged to donate the last $1,000 to put the drive over the top.

Additionally, Invisible Fence came to the rescue as well—they have committed to donating one kit to every station in Austin! That means instead of AFD having to purchase 78 kits (in order to equip each unit), they will only have to buy 33. Whatever funds remain after that will be earmarked and set aside for future kit purchases due to necessary replacement or new units coming online.

“The community really stepped up to help us out with this effort,” said Fire Chief Rhoda Mae Kerr. “We are so grateful to all those who donated—individuals, non-profits, and corporations— because no matter how big or small the gift, it all added up. And now, we’ll be able to continue serving all those who need our assistance, whether they have two legs or four!”

The Austin Fire Department was founded on September 25, 1857 and is now one of the 20 largest departments in the country, with 45 fire stations located throughout the city and more than 1,100 employees.

NOTE: A media event/photo op will be coordinated with all of the parties as soon as the kits from Invisible Fence are received and all the money has been collected.