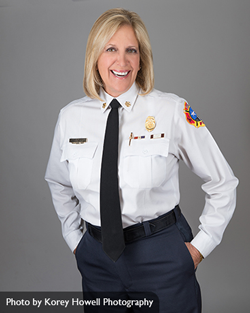 Chief Rhoda Mae Kerr is a fourth-generation firefighter who began her career in the fire service in 1983. She is currently the Fire Chief of the Austin Fire Department and most recently served in that same position with the city of Little Rock, Arkansas; she was also Deputy Fire Chief at Fort Lauderdale, Florida.

Chief Kerr brings a Master’s in Public Administration (Florida International University), a Bachelor of Arts degree in Physical Education and Health (William Paterson University), an Associate’s degree in Fire Science Technology (Broward Community College), and two certifications from the Harvard University program for Senior Executives in State and Local Government.  She is also a graduate of the National Fire Academy’s Executive Fire Officer Program.  Prior to entering the fire service, Chief Kerr was a coach and physical education teacher at the high school level for 12 years.

The Austin Fire Department is a full-time, career fire department with approximately 1,100 sworn personnel, 80 civilian personnel, 45 fire stations and seven other work sites. We serve the City of Austin, which covers 268 square miles and has population of approximately 830,000 in both an urban and suburban setting.

AFD responds to more than 84,000 incidents annually, with approximately 73 percent of the incidents being medical in nature. Other incident types include fires, hazardous condition, wildfires, and rescues (cave, high-angle, rope, vehicle, structural, etc.).